From Colonisation to Globalisation Conference 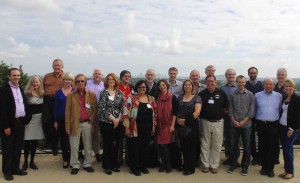 Ideas emerging from two European Research Council-funded projects, the Sealinks Project and the Palaeodeserts Project, have led to a spin off conference.  The conference “From Colonisation to Globalisation: Species Movements in Human History” saw top international scholars from a diverse range of disciplines meet in scenic Saint-Germain-en Laye on the outskirts of Paris from 4 to 7 October, 2013.  Organised by Michael Petraglia, Nicole Boivin and Remy Crassard, the conference brought together archaeologists, geneticists, geographers, biologists, historians and others to consider the role of that humans have played in moving species around the globe beginning in the Pleistocene.  Discussion explored the human-assisted movement of both wild and domesticated plants and animals, pathogens and disease vectors, invasive species and hitch-hiking commensals, and considered the implications of these movements for the creation of new humanised landscapes and ecologies.  Several publications will disseminate the conference papers and discussion to a wider audience, including a Cambridge University Press book to be published in 2014.